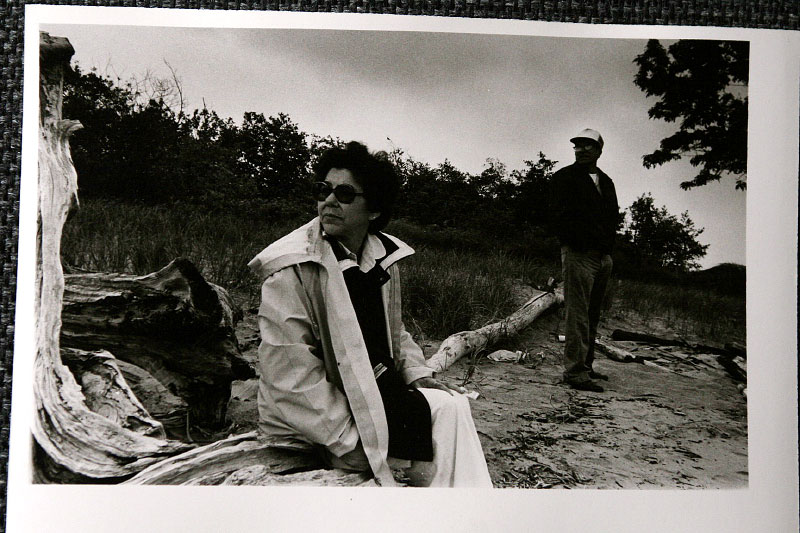 Thoughts of my mother are always bittersweet. In recent years, however, the bitterness has grown into hope. It’s not an easy hope, covered in thorns as it is, but hope nonetheless. In my younger days, I was derailed for years by a deep sense of personal injustice. She was not the loving mother I deserved to have. She was often cold and harsh, self absorbed and quick-tempered; she was never like the doting mothers of my white classmates. For many years, I felt terribly deprived and justifiably resentful.

In recent years, I’ve begun to realize that my resentment fire scorched only my own heart, so I’ve let it burn down to a tolerable ash. I am beginning to see this tiny irascible woman for who she truly is, a survivor whose dynamic force of will has stopped at nothing to hold onto life. We often joke that she will bury us all; she turned 83 this year. As I learn more about her personal history, I am humbled and grateful for her strength. In meeting the relentless daily demands of my own children, I now see that my mother gave me a great gift, a gift she never dared hope to receive as a child. She stayed.

Like too many Indian people from her generation, she and her siblings were forcibly taken from their family by non-Indian reservation authorities and turned over to the church and the Catholic nuns who ran a boarding school.

Now that her guard is down, robbed from her by growing dementia, the painful memories from that time seem to rule her life. Each time we speak with her, she brings up the abuse she suffered at the sister school. She always begins her recollections in the same way, leaning in close, “I probably shouldn’t tell you this, but….”

Her most recurring memory is the sexual abuse she suffered at the hands of an older boy while at the school and how she “screamed and screamed.” She also tells us how the nuns nailed her younger brother overnight to the wooden plank dining table when he wouldn’t eat a dinner of stewed onions and of course the beatings for speaking the Ojibwe language, for stealing food, for crying for one’s parents, for disobeying, for not working hard enough, the list goes on.

Life at the sister school robbed my mother of the experience of family or knowledge of parenting skills. Visits with family were kept to a minimum with the nuns overseeing the event to ensure nothing “Indian” was passed along to the children. She recalls the only visit by her mother who gave her a five-pound box of chocolates. Back in the dormitory she quickly devoured the candy until she vomited. She often told us she never liked chocolates after that and also reports that she never got along with her mother. It was as though a mother’s love was a sweetness she could never have. She remained estranged from her mother her entire life, never forgiving her for not resisting the nuns. My mother never gained the luxury of objectivity about her life. Her only ally was the chip placed firmly on her shoulder, a fierce insistence that she wasn’t a “dirty” Indian but always lurking under the surface a lingering fear that she was.

In the sister school my mom and her siblings learned the domestic arts, with a special emphasis on cleanliness. The latter remains a lasting lesson for my mother and many Indian women of her generation as they try repeatedly to wash away the terrible shame of being a “dirty Indian” the name the nuns used for them. Even today, I feel a tiny degree of guilt if I stand and use a mop to wash the kitchen floor rather than using a rag while “on my prayer bones,” as my mother harshly instructed.

Like most Ojibwe women, my mother is a great storyteller. I recall summer afternoons lying on her bed in the dark cool bedroom where she would recreate scenes from her childhood for me. She told of the death of cruel Sister Catherine, the Mother Superior of the convent who beat my mother for stealing an apple. Sister fell down the steps to the root cellar where the food was stored and hit her head. “Oh, how us kids did a silent cheer!” she recalled, still giggling at the memory of Sister getting her “comeuppance”. I know now, however, that most of the stories were sanitized and wishful memories in which her father was not a violent alcoholic who beat his young bride and repeatedly left them after vain attempts to provide for his family. Her mother was not a desperate young woman who simply gave up on her children. In her stories her father was a hero, who never stopped trying to win back his children. My mother left out the real barbed wire pain of abandonment, worthlessness and undiagnosed mental illness. I learned these things on my own, when I was strong enough to hear them.

The memories from Indian boarding schools are still handed down one generation to the next where they lodge in our hearts like tiny jagged pieces of steel, robbing us of our pride if we let them. Those sister school stories became part of my psyche even before I could speak. Like a big ugly suitcase, they were passed along to me to carry if I would; I think it is much the same for other native people.

Although feeble, the recent U. S. apology for its “ill-conceived policies” can add to efforts to break this cycle. It may help us move towards some sort of healing. Certainly no amount of reparations could ever make my mother un-see or un-feel the happenings at the sister school. At the very suggestion, I imagine her spitting out the following, “I don’t want any danged ol’ rotten white man’s money!”

My great hope is that the apology and actions like it will set the stage for validation that the Indian boarding school era really happened, that the hurt my mother suffers wasn’t her fault. Even greater, my hope is that maybe we won’t have to keep passing down the hurt, with understanding maybe we can take away some of its power.

For now, in my family we are serving as my mother’s Truth and Reconciliation Commission. We listen attentively to her stories, told over and over again. Gratefully we are now able to pray she may at last find peace.

The History of U. S. Indian Boarding Schools

The Indian boarding school era began in the late 19th century during President Ulysses S. Grant’s administration. Boarding schools were touted as a far more economical solution than outright war to the nation’s “Indian problem”. Under Grant’s Peace Policy of 1869, thousands of native children as young as five years old were taken from their families and subjected to a life of harsh discipline.

The schools were modeled on a prison school that Captain Richard H. Pratt had created earlier for Indian prisoners of war in Florida and were usually run with military precision. Pratt’s punitive philosophy of rigid order became the desired model. Punishment was swiftly meted out for offenses such as displaying any Indian tendencies. Student’s mouths were scrubbed out with lye soap for uttering any words in their native language. Children were virtual prisoners at the schools, forbidden to visit their parents, forced into hard labor and were subjected to a host of abuses including physical and sexual abuse by school officials, employees as well as peers according to former students. Since the schools usually functioned with limited funds, children frequently died from starvation or other preventable diseases. Pratt’s philosophy to “kill the Indian to save the man” was widely embraced as a more humane, Christian solution to the Indian problem. Native children were trained to become useful contributing members of the new America as domestic servants, the only role for which they were deemed fit. This policy of forced acculturation was readily supported by the U. S. government which appropriated funds for more than 400 such schools.

The system continued well into the 20th century. By the mid-1930’s, schools began to slowly improve, gradually including native culture, and becoming less coercive by the 1970’s. Although most of today’s Indian boarding schools are located on reservations and operated by tribes, the schools are plagued with a lack of funding, alcohol and substance abuse and high suicide rates among students according to the National Center for American Indian and Alaska Native Mental Health Research. A recent report by the Government Accountability Office found that at least 60 percent of Bureau of Indian Affairs schools have inadequate funding.

Physicians, educators and leaders in Indian country have recently begun making the public connection between the legacy of hurt and abuse suffered at boarding schools to the high levels of social problems within the native community. According to a 2007 U. S. Justice Department study native women are 2.5 times as likely to be raped or sexually abused than other women in the U. S. Native people struggle with unprecedented levels of alcohol and substance abuse and have a high incidence of abuse and violence toward children as well as high levels of suicide, especially among young people. Grass roots native organizations such as the Boarding School Project are making the case that the intergenerational trauma experienced at boarding schools has created post -traumatic stress disorder that has been passed down through generations. The project is working to document boarding school abuses so that native communities can begin healing and demand justice.

The Canadian government, which has a similar history of government run Indian boarding schools entered into an Indian Residential School Settlement Agreement last year with the country’s aboriginal peoples. The 2$ billion settlement provides reparation payments to those who attended boarding schools and includes a Truth and Reconciliation Commission that will “provide former students and anyone who has been affected by the Indian residential school legacy with an opportunity to share their individual experiences in a safe and culturally appropriate manner through statement-taking or truth-sharing.”

Until recently there has been no public acknowledgement of the U. S. governments role in the creation and maintenance of Indian boarding schools. The Indian Health Care Improvement Act that recently passed the U.S. Senate carried an amendment that officially “acknowledge[s] a long history of official depredations and ill-conceived policies by the United States’ government regarding Indian tribes, and offer[s] an apology to all Native Peoples on behalf of the United States.” The resolution was met with mixed reactions from native leaders. Jim Gray, principal chief for the Osage nation remarked to the Tulsa World, “Words and deeds go together. If there’s words but no deeds…now what will be done with it remains to be seen.